My net worth post came a little slower because I was waiting for my CPF interest to be credited on the last day of 2018. I remember when I was still in school, there were always ten-year series questions to attempt before the actual exams. That was my inspiration for my last CPF post, which was rather easy because CPF statements are available online.

Net worth is a little trickier, since whatever data I have a result of expense tracking and budgeting which I’ve been doing. I don’t have ten-year series, but I do have a respectable 7-year series 😉

In my previous blog posts, I didn’t use a consistent date to benchmark my progress which made comparison difficult. This time round, I’ve charted (wheeee nice diagrams) the values based on 31st December of every year. So, what goes in to my calculation?

Just as I had omitted the value of my HDB apartment in previous years, I would do the same here. Calculate using whichever method you want. At the end of the day, it is what we make of the number that truly matters.

Pretty simple for me.

Churning out the numbers is pretty simple because I use a budgeting app called You Need A Budget (YNAB) to track basically my whole life. The earliest numbers I have go as far back as 2012.

Blue bars are basically the total amount I’ve added for the year. Surprise surprise, my net worth is actually negative for 2012, 2013 and 2014! In the early years of my working life, I was basically jumping into hole after hole that I dug for myself. Repaying my $20,000 study loan, saving (and spending) for my wedding and house, HDB and renovation loans – man, I couldn’t catch any break financially. Thinking back, it was probably a blessing in disguise to clear/engage all the big-money items early.

And I’ll be perfectly honest with you – I wasn’t always as financially-inclined as I am now. Let’s just say things happened during the 2013-2015 period and as all stories go, I wouldn’t be who I am today without my past. 穷过，才知道自己的能耐，才知道钱的重要，才知道要知足才会好过。

The final number for 2018 surprised even myself – I added a total of $84,259 in the entire year. If we averaged out the progress over the last six years, it would have been an average addition of around $37,000 annually. 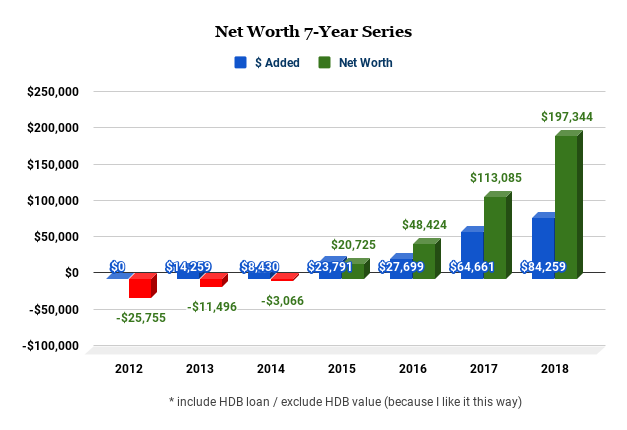 For this year, I don’t foresee any huge changes in terms of employment and my ability to churn out some alternative income so I am hoping to see a similar set of huge numbers. At the end of the day, this number matters only to myself, because only I myself knows what my future plans are. Like what I have mentioned in my CPF post, 2019 would likely be a tipping point of sorts as I will meet my CPF Full Retirement Sum ($176,000) and I have to start thinking a lot harder of the end-game for myself and my loved ones.

From 2012 to 2018, I have actively moved around a fair bit in this diagram in search of the holy grail but I’ve yet to hit the sweet spot in the middle. Best case scenario, I have actually gotten 3 out of 4 which isn’t that bad. Maybe I won’t ever reach the middle, but hey I can touch my heart and say I’ve fought for it. No regrets?

These CPF numbers and net worth numbers I’m posting? Better late than never, right? It isn’t necessarily to be financially-independent-retire-early (FIRE) but rather to improve my financial security and increase mobility. There are plenty of successful (wealthier/younger/etc) bloggers out there, but what’s really interesting to me is the driving force behind their pursuit. And yours too. Perhaps you might wanna share 🙂 This blog you’re reading here? That’s just an average guy trying to find his rightful place on this little planet we call Earth.

Thank you, for following my progress and accompanying me on my journey.

P.S. Turtle Investor 2018 Giveaway winners x 2 will be receiving an email from me soon 🙂 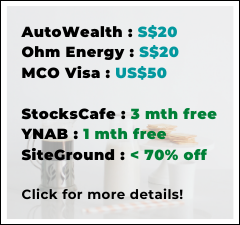